Salmonella, E. coli, campylobacter and listeria monocytogenes live in the intestines and feces of animals and humans without harming them. But when very tiny amounts of feces touch food, microscopic pathogens are passed along. Unless the pathogens are killed by dehydrating the food, irradiating it, cooking it at high temperatures or applying acid to it, contaminated food can cause kidney failure or death.

Meat and Poultry
Small flecks of feces can spread to meat in the slaughter process as hides and intestines are removed. Animals’ hides or feathers are dirtied with their own feces and the feces that accumulate in their feedlots, coops and barns.

Slaughterhouse workers or more often machines take the hides off cattle. If workers cut the hides off by hand, they can spread feces to the meat if their knives touch the hides or tails and aren’t sanitized before touching the exposed meat again. Hide—removing machines may fling feces off the hides and onto exposed meat.

If workers accidentally break an animal’s gastrointestinal tract while removing it, feces or vomit may contaminate the meat. In beef and pork, each end of the tract needs to be sealed off with plastic to keep the contents from leaking out. Workers or tools can accidentally contaminate meat during this process.

After chickens are slaughtered, the birds are often chilled in cold water rather than in refrigerators. Feces and the pathogens in them can spread from bird to bird through the water.

Milk, Dairy and Eggs
Milk can be contaminated by fecal matter on the cow or by the equipment used for milking. Udder infections also can contaminate milk. Pasteurizing milk and cheese kills pathogens with heat, reducing the risk of illness. Hens can be infected with pathogens from chicken and rodent droppings in the hen house. Hens can pass pathogens onto eggshells as they sit on the eggs. If the pathogens invade hens’ ovaries, the insides of the eggs they lay also may be contaminated.

Fruits and Vegetables
Feces can spread to crops through surface irrigation water. When it rains, water runs off feedlots into streams and rivers that are dammed and controlled for crop irrigation. In some countries, sewage also is dumped into rivers.

Animal feces, also called manure, are sometimes used as fertilizer. Manure that has not been aged or composted to kill pathogens with heat can spread the pathogens to crops. Feces also can get on produce if animals, including birds, pass through the field, or if farm workers don’t have access to restrooms or handle crops with unwashed hands.

Wild fish and seafood may be contaminated with pathogens if sewage is dumped into the sea and rivers. Deliberate dumping happens in other countries, and U.S. waters may occasionally be contaminated if very heavy storms flush sewage into the ocean. Fish and seafood farmers abroad, especially in Asia, sometimes put untreated manure or human waste into their ponds to grow algae for fish food. 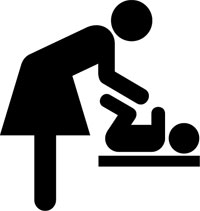 Other Factors
Improperly cleaned equipment can contaminate food during processing. Rodents, birds and other pests also can spread feces and pathogens at the farm and in food processing and storage areas.

Humans can spread pathogens to food when they process, prepare or eat it in unsanitary conditions. Pathogens left by raw foods such as meat can grow on unsanitized surfaces, equipment and hands, even those that look clean. People also can spread pathogens to food with dirty hands contaminated with tiny amounts of fecal matter when they used the restroom, changed diapers or handled animals.